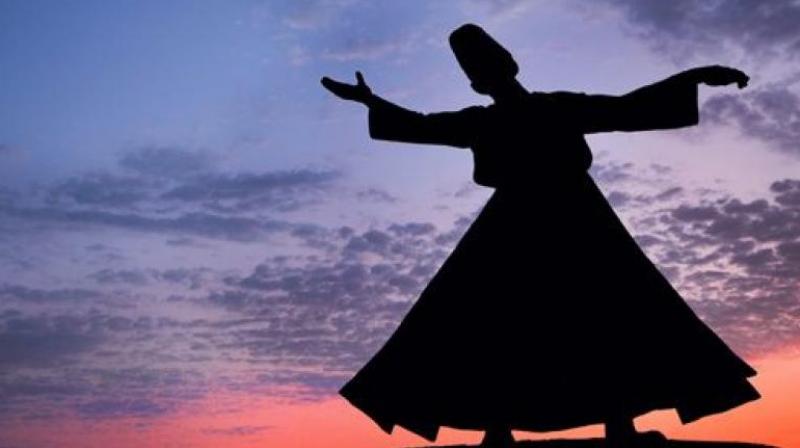 Sufism in Kashmir valley is something that is integrated with the soul of its people and has been the sole guiding factor that has led the people of Kashmir through all of their turbulent history and is something upon which the social foundations of a Kashmiri society resides. Kashmiri Sufism not only reflects the behavior of a Kashmiri person – both Pundit & Muslim, but is also a sum total of the spiritual wisdom of all saints and sages, who have lived in Kashmir valley right from the time of Kashyapa Rishi (from whose name, the word Kashmir is derived from). Yet, the amazing thing about Kashmiri Sufism is that it is not like other Sufi traditions that exist in various parts of Central Asia and South Asia. While many of the early Sufi preachers came to Kashmir valley from Central Asia, the shape and character of the Sufism that eventually developed in the Kashmir valley was completely indigenous that incorporated the local tradition and philosophies, including that of Kashmiri Buddhism and Kashmiri Shaivism (a sect of Hinduism dedicated to the philosophical teachings of Hindu Lord Shiva). This is something which makes Kashmiri Sufism also different and distinct from Barelvi school of Islam from which most Sufi traditions of India, Pakistan and Bangladesh have evolved. A Kashmiri Sufi is neither like any other Sufi from Central Asia, nor like any other Sufi from South Asia. The Kashmiri Sufism has a character of its own, which incorporates mystical philosophies of Islamic teachings with tantric traditions of Buddhism and Hindu Shaivite philosophies of Lord Shiva. This is something, which is unparalleled in the entire spiritual landscape of South & Central Asia. While there existed in Kashmir valley since medieval era, some of the more traditional and conventional schools of Sufism with roots in Central Asia like the Suhrawardis, the Naqshbandis, the Qadris and Kubrawis the Sufi order that actually took roots in Kashmir valley and spread its influence among the people of Kashmir was a Hindu – Muslim syncretic and unconventional form of Sufism called – “Rishism” or “Rishi order” that produced many “Rishis” or Sufis from both Hindu Pundit and Kashmiri Muslim communities and spread the message of reaching out to the God through both the teachings of the holy Quran and hadiths as well as philosophies of Hindu Vedas and that of Shaivism. This secular and indigenous character of Kashmiri Sufism was the foundation upon which the Kashmiri Hindu Pundit and Kashmiri Muslim syncretic tradition of “Kashmiriyat” was born, which earned the Kashmir valley a title of “Rish Vaer” and “Pir Vaer” (valley of Rishis and Pirs). The greatest Rishi of this unique “Rishi order” was Sheikh Nuruddin Noorani also known as “Nund Rishi” or Rishi Sahazanand (the blissful one). The Sufi Rishism that he promoted among the people of Kashmir taught the universal principles of peace, harmony, brotherhood and love, something which is common to both Islam and Hinduism. He incorporated spiritual teachings of Islam with yogic traditions of Buddhism and Shaivism and encouraged meditation in caves and other yogic practices as personal means of communicating with the Allah. He was fiercely critical of Kashmir’s infamous Brahminical order and caste system, wherein few upper caste Kashmiri Muslims and Pundits subjected majority of the Kashmiri population to poverty and destitution.  The greatest spiritual influence on Sheikh Nuruddin Noorani was a charismatic female rebel Kashmiri Hindu Pundit of the 14th century Kashmir – “Lal Ded” also known as “Mata Laleshwari” to Kashmiri Pundits and “Lala Arifa” to Kashmiri Muslims. She was of the greatest philosophers and thinkers of Kashmiri Rishi order, who was immensely critical of the dominant hold of Brahmin priests and Muslim Mullahs over common Kashmiri masses and encouraged them to connect directly with the God in Kashmiri language- the language of the masses, rather than Sanskrit or Persian/Arabic- the language of the elite. Her teachings called “Lal Vaakhs” composed in poetic form in native Koshur language promoting communal harmony between Kashmiri Muslims and Kashmiri Pundits, made her a true Sufi Rishi of the Kashmiri masses.  Together, the teachings of Nund Rishi and Mata Laleshwari presented a harmonious, tolerant and affectionate face of Kashmiri Sufism based on the principles of oneness and religious humanism, which laid foundations for a secular Kashmiri society, where a Hindu Shiva temple existed besides a Sufi “Astana” or a shrine and where both Kashmiri Pundits and Kashmiri Muslims participated together in each other’s festivals and revered all the saints of the Rishi order. Such teachings of Kashmiri Rishism were also promoted by many Kashmiri Muslim Sultans like Zain-ul-Abidin ( also known as Bud Shah) who reversed many of the anti-non-Muslim policies and practices of earlier Muslim Sultans and brought back many exiled Kashmiri Pundits with honor and dignity back into Kashmir valley. He practiced and promoted teachings and principles of Kashmiri Rishism, wherein he would participate as a chief presiding priest in celebrating the birth of River Vitista (Jhelum) much to the annoyance of orthodox Muslim clergy. The Kashmiri Sufi Rishi order laid down the foundations of a secular and syncretic Kashmiri society, where Kashmiri Pundits and Kashmiri Muslims lived together in complete love and harmony for centuries. Such was the closeness between these two communities facilitated by Kashmiri Sufi Rishism that it was nearly impossible to distinguish between a Kashmiri Pundit and a Kashmiri Muslim. Today, there is a need to further revive the secular spirit of Kashmir’s unique and indigenous Sufi Rishi order that guided the people of Kashmir through all these years and bound them together in the spirit of oneness and togetherness.

The author is an aspiring Politician, Political Analyst and Columnist, who served as PRO to Ex. CM of erstwhile state of J&K. He has also done his MBA & MPA. Views are personal. He can be reached at [email protected].

A News & Knowledge media startup in India, The Dispatch employs staff with best journalistic abilities. Our staff comes from diverse backgrounds such as history, culture, science and sports to security and global affairs. The staff at The Dispatch is committed to promptly respond to readers’ feedback. Write to us at [email protected]

A series of continuous crimes

'I never had a doll that looked like me': Lightship Capital leads $1M round...

'I never had a doll that looked like me': Lightship Capital...