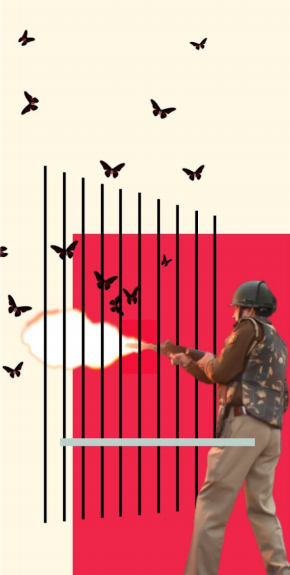 A new report on the violence that broke out in different parts of North-East Delhi, allegedly immediately after an incendiary speech delivered in Maujpur on February 23, 2020 by Kapil Mishra, a BJP politician, in the presence of the Deputy Commissioner of Police of North East, Ved Prakash Surya, has accused the Delhi police of “participating in the violence”.
Titled “Manufacturing Evidence: How the Police is Framing and Arresting Constitutional Rights Defenders in India”, published by The Polis Project, the report claims to have evidence of how Delhi cops were “leading, participating and encouraging targeted violence against Muslim residents of the region during the violence”, even as delivering “open threats on the lives of anti-Citizenship Amendment Act (CAA) protestors, including on Muslim women, physical attacks and assault by the police, seen openly with armed perpetrators.”
At the same time, it accuses the Delhi for “suppression of evidence related to violence by Hindu nationalists.”

Even as the Delhi Police’s narrative holds local, student, and civil society activists and protestors directly responsible for the violence, it systematically fails to mention evidence regarding the role played by Hindu nationalists.
A notable omission is that of Kapil Mishra, a senior leader of the ruling BJP party, who on the same day and in the very area in which the violence broke out, stood next to the Deputy Commissioner of Police and declared that if the Police does not clear out the protestors, “we will not listen to the Police […] we will have to come on the roads.”

The open admission of “not listening” to the Police, and use of vigilante, extra-legal tactics should have been seen as incitement of violence by the Police, and by any other authorities present. The chargesheets, however, fail to mention the speech.
Also excluded are the earlier inflammatory speeches made by two Hindu nationalist political leaders — Anurag Thakur, who is a Union Minister in the Government, and Parvesh Sahib Singh Verma, who is a Member of Parliament. Thakur, who used slogans such as “Desh ke gaddaro ko… Goli maaro saalo ko” (Those who are traitors of this country… kill the bastards) , and Verma, who presented objectionable comments in Parliament against the Shaheen Bagh protesters were banned by the Election Commission of India from campaigning in the Delhi elections.
A petition was filed seeking the registration of a First Information Report against all three political leaders (Mishra, Thakur, and Verma) on the grounds that their speeches incited violence. Further, Justice Muralidhar questioned the Delhi Police on the delay and the lack of acknowledgment of the speeches themselves as crimes.
Nonetheless, till date the FIR has not been filed. Eight complaints against the ruling party’s leaders have been buried by the Delhi Police. The report by the High Level Fact-Finding Committee constituted by the Delhi Minorities Commission notes that this inaction by the Delhi Police against the BJP leaders is accompanied by the filing of cases against Muslim victims for the violence. The report made particular mention of the Kapil Mishra speech referred to above, which the Police did nothing to stop “almost immediately after” which the violence started.
Recently, the Delhi Police identified a WhatsApp group with at least 125 members named Kattar Hindu Ekta, in three charge sheets filed in connection with the killings of three men. In the conversations in the group, three members bragged about “killing Muslims” and “dumping their bodies in the sewer” and offering manpower and guns when necessary.
This is the first hard evidence placed on record in a police chargesheet of the commission of violent crimes by a Hindu nationalist group during the violence. It remains to be seen whether the Delhi Police will be compelled to change the course of its investigation, either by its own investigators or by the courts, due to this. At present, there are no indications of a change in course.
The glaring omission of the evidence of incitement and abetment of violence by Hindu nationalist leaders, in contrast to the emphasis on the unsubstantiated allegations about the anti-CAA/NRC protestors causing violence (including murder) is illustrated by examples of the following two chargesheets: 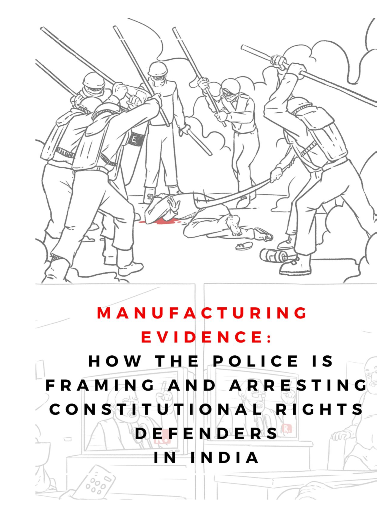 A. The 70-page chargesheet for the death of a Police Head Constable begins with 12 pages devoted to the Police narrative about the anti-CAA/NRC protests from December 2020 onwards. (The entire charge sheet is 1032 pages, including assorted documents). Evidence of the pressure brought upon young local Muslim men by the Police to turn into hostile witnesses is to be found in the striking similarities across three different statements, including the repetition of specific words and sentences, purportedly made by three independent witnesses.

The confessional statements of the17 young local Muslim men who are the accused are also similar to each other. The police constable received one bullet, but all 17 youth have been booked for his murder. Several senior activists have been named as “conspirators” in the murder  case, even though there is no evidence linking them to the crime.

The chargesheet simply alleges (without evidence) that there was a “conspiracy” to commit riots, and that the violence was unprovoked. It however fails to include in its theory the inflammatory speech by the BJP leader Kapil Mishra.

Notably, the chargesheet starts with the death of the Police Head Constable, who was a Hindu man, and goes on to mention the total death toll of 53 dead in the violence without mentioning the fact that a majority (39) of them are Muslim. Instead, the analysis blandly states that “the violent mob in communal frenzy rampantly started selectively targeted the properties of Hindu community.”
B. A second charge sheet related to the death of an official from the Intelligence Bureau provides a chronology of events leading up to the violence. It begins with the student protests against CAA and NRC at Jamia Milia University on December 13, 2019, and continues to list almost all the other protests in Delhi including Shaheen Bagh till it reaches the protest near the site of the violence on 23 February 2020.
The 1500-word chronology of events does not however mention Kapil Mishra’s speech. As an investigative media report aptly comments: “Strangely, the Police considers protests in Jamia Millia Islamia — separated from the riots by a period of two months and a distance of over 20 kilometers — more relevant than a provocative speech delivered on the exact area where violence broke out 24 hours later.”
The conspiracy theory being propounded by the Police is breath-taking in its sheer lack of logic. If anti-CAA Muslim protestors were solely responsible for the violence, as the police narrative on the causal sequence has repeatedly sought to emphasize, then how does one account for or explain the overwhelming fact that a very large majority of the victims of violence, according to the Police’s own affidavit, as well as over three-fourths among those dead were Muslims themselves?

Surely, even the Police cannot suggest that this violence too was carried out by the Muslims themselves as part of a deep, diabolical conspiracy?

Opinion: A message to Rose Byrne, star of Christchurch terror attack film They Are Us: Take the backlash seriously

Early Release – Outbreak of SARS-CoV-2 B.1.1.7 Lineage after Vaccination in Long-Term Care Facility,...

Early Release – Outbreak of SARS-CoV-2 B.1.1.7 Lineage after Vaccination in...