It is a morning ritual at every Thai school, steeped in tradition and nationalist decorum: children stand stock still and sing the national anthem as the kingdom’s blue, white and red flag is raised.

But this week, amid a growing “Free People” youth protest movement, children across Thailand raised their hands during the ceremony to make the protesters’ trademark, defiant three-fingered salute.

The gesture originated in The Hunger Games, the dystopian young adult franchise of books and films, but has been adopted across Thailand as an emblem of a movement that has spread from university campuses to secondary schools.

The gesture is shocking for a conservative culture in which respect for elders and deference to protocol and governing institutions are taught from a young age.

In images shared widely on social media, from Bangkok to the poor east region to the mostly Muslim deep south, children have been raising three fingers.

It’s been described among youth as symbolic of the French Revolution’s values of liberty, equality and fraternity, so it’s easily adopted as a symbol

“Recently, it’s been described among youth as symbolic of the French Revolution’s values of liberty, equality and fraternity, so it’s easily adopted as a symbol.”

The spread of the defiant gesture highlights the extent to which Thailand’s restive young people, who are demanding a new constitution as well as reform of the monarchy, have caught the kingdom’s arch-conservative, military-backed establishment off guard.

Schoolchildren have also been tying white ribbons around their wrists or schoolbags or in their hair as another symbol of defiance against dictatorship.

According to Human Rights Watch, students as young as 12 have faced school punishment or police harassment for flashing the salute.

The UN Children’s Fund on Tuesday voiced concern about “the potential harm that children may be facing amid the ongoing protests in Thailand”, and called on all parties to uphold children’s and young people’s right to freedom of expression.

Students plan to picket Thailand’s education ministry on Wednesday to protest what they see as a surge of intimidation and harassment in schools.

Nataphol Teepsuwan, Thailand’s education minister, told the Financial Times that “the government understands people’s right to express their view” at schools, albeit without disrupting the national anthem.

“The government is not going to put any strict guidelines on them expressing their opinions or gestures,” Mr Nataphol said. “But they should use the student council to express their views.”

Thailand’s protesters have even attracted support in Hong Kong. Joshua Wong, the democracy activist, this week voiced his support for the demonstrators, tweeting a cartoon of six children making the gesture, with the slogan “Freedom of speech is a human right” spelt out on their face masks and the hashtag #SAVETHAIDEMOCRACY.

The wave of protests has been gathering momentum since December when Future Forward, a youth-backed opposition party challenging Thailand’s military-backed establishment, faced legal harassment and was banned. Flash mobs were held in Bangkok at which the three-fingered salute was given. 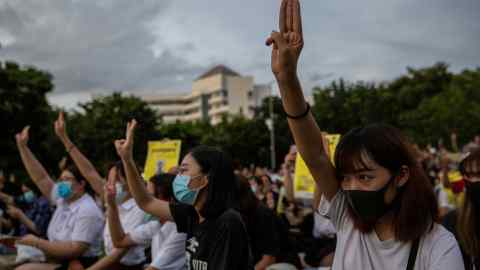 The students have used humour in their protests and accommodated a broad range of causes, with LGBT activists flying rainbow flags and demonstrators organising protests themed around Harry Potter, the Japanese cartoon hamster Hamtaro, and durian, the pungent tropical fruit. The protesters have adopted “Do You Hear the People Sing”, the anthem of the downtrodden from the musical Les Misérables, as their movement’s hymn.

Older people, including supporters of the exiled populist Thaksin Shinawatra, have joined the protests, and organisers have rebranded their movement from Free Youth to Free People.

While quirky in nature, the student protesters have moved far beyond previous protest movements, including Mr Thaksin’s “Red Shirt” supporters, in the breadth and fearlessness of their demands.

At a rally last week students read out their 10 demands to reform the monarchy, an unheard of and risky step in a country where insulting King Maha Vajiralongkorn or his immediate family is a criminal offence punishable by up to 15 years in prison.

The 10 demands included revoking the punitive lèse majesté law and ceasing “all public relations and education that excessively and one-sidedly glorify the monarchy”.

The three-fingered salute first came into use in Thailand after the 2014 coup that brought Prayuth Chan-ocha, now prime minister, to power. At the time, the junta banned public gatherings, speeches or posting of signs, and some Thais adopted the salute as a silent gesture of defiance.

“It’s fresh, as it has never been used before in all these colour-coded movements,” said Ms Viengrat.

What I Learned in an Iranian Prison

10 fabulous castles and fortresses in Israel

Why Batadrava is so important to BJP

What I Learned in an Iranian Prison