Although Taiwan has much to offer Muslim visitors, those who wish to pray in mosques and observe Islamic dietary laws are often out of luck

Taiwan’s tourism industry, it’s fair to say, has pretty much conquered the Japanese market. Every year since 2014, Taiwan has been the no. 1 overseas destination for Japanese travelers. While Chinese tourists have the money and inclination to come in droves, they lack the freedom to go wherever they want. If Taiwan is to attract more visitors from nearby countries, Southeast Asia is thus an obvious region to focus on.

For decades, Southeast Asians with Chinese ancestry have been coming to Taiwan to study and do business. However, reaching beyond the Chinese diaspora is complicated by religion. Islam is the majority faith in Malaysia, Indonesia and Brunei — yet visitors to Taiwan who wish to pray in mosques and observe Islamic dietary laws are often out of luck.

Just nine of Taiwan’s 15,000-plus registered houses of religion are devoted to Islam. Outside of restaurants that are explicitly vegetarian, finding meals that don’t include some amount of pork or lard can be difficult.

Official efforts to tap into the huge Muslim market — almost a quarter of the world’s population — began in 2008, when the Tourism Bureau and the Taiwan Visitors Association (法人臺灣觀光協會) invited international Islamic tourism experts to visit Taiwan. The bureau recently established permanent offices in Kuala Lumpur and Jakarta. In the first half of this, a new office in Dubai will promote Taiwan throughout the Middle East.

In 2010, the bureau published a 104-page booklet titled Traveling in Taiwan for Muslims. An example of fine intentions but flawed execution, it mentions the availability of snake wine and snake meat at Taipei’s Huaxi Street Night Market, even though both are haram (forbidden for Muslims). It also introduces Yu Zhen Zhai (玉珍齋), a traditional bakery in Lukang which, as of the end of last year, had yet to obtain halal certification. These blunders don’t appear in the 2012 edition of the booklet. 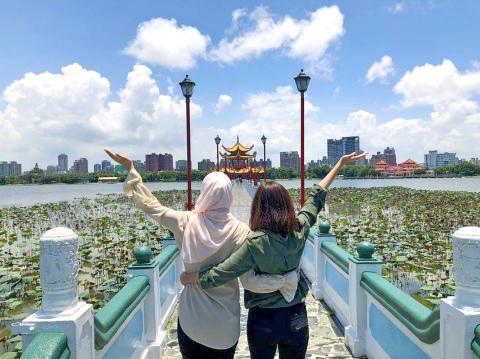 A lack of halal food around major tourist spots is one of the biggest obstacles preventing more Muslims from coming to Taiwan, says Elaine Tee of Have Halal, Will Travel (HHWT), a Singapore-based travel and lifestyle platform for Muslims. She describes Taiwan as “a pretty new destination for the Muslim segment. It has lots of natural sights that can attract Muslims, coupled with lower costs compared to Japan and some other destinations.”

The HHWT team visited Taipei and Kaohsiung in 2018 at the invitation of Scoot, a budget airline.

“During our five-day trip, we visited sites like Jioufen, Ximending and Pier-2 Art Center,” Tee recalls. “We did a lot of research regarding Jioufen’s street food. In places like Houtong (猴硐) and Shifen (十分), there wasn’t any halal food, and we had to plan our meals around this fact. We wanted to try traditional Taiwanese breakfast but weren’t sure which places were Muslim-friendly, as many places serve pork.” 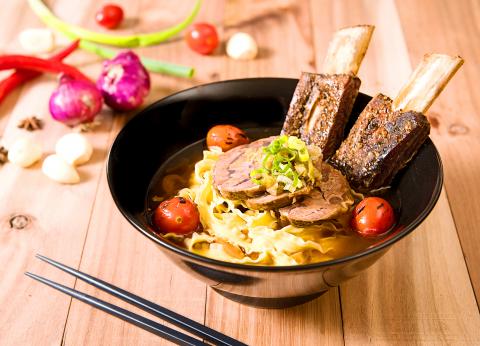 HHWT has worked with the Alishan (阿里山) and Tri-Mountain (參山) national scenic area administrations to promote those destinations.

“We definitely saw the effort they’ve made to educate homestays and restaurants to cater for the Muslim segment,” Tee says.

But potential visitors, she thinks, “are still concerned about the language barrier and getting around outside of Taipei. It’s also hard to get information on places like the Tri-Mountain area.” 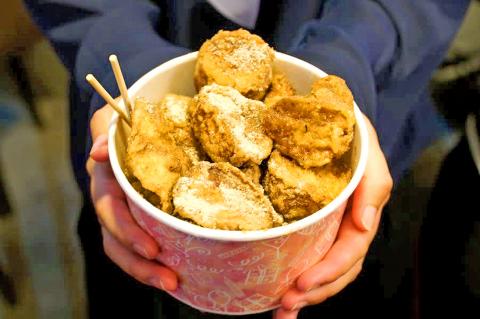 Recognizing that people won’t come if they can’t find anything acceptable to eat, the Tourism Bureau has been working with local Islamic groups since 2012 to coach tourism businesses so as to improve the environment for Muslim visitors.

“Our short-term and medium-term goals are to improve the Muslim-friendly environment and make Taiwan a more popular destination among Muslim travelers,” the bureau says in answers provided by e-mail. “To encourage the industry to prepare for Muslim tourists, we’ve offered subsidies for the development of new itineraries, halal catering, Southeast Asian language tour guides and other improvements.”

The bureau says it has earmarked NT$5 million per year for last year and this year, and has been set aside to subsidize businesses seeking halal certification.

According to the bureau, by the end of last year, the number of certified restaurants and accommodation providers had reached 252.

With the exceptions of Keelung and the outlying islands, Muslim tourists can now find suitable restaurants and accommodation in every city and county, the bureau says. Through cross-ministerial efforts, it has also promoted the establishment of Muslim prayer rooms and facilities for ritual ablutions in airports, TRA and HSR stations, and scenic area visitor service centers.

Last September, Taiwan’s first “all halal” vending machine was unveiled in Taipei. There are plans to install others at tourist spots around the country.

The bureau says that Muslim visitors to Taiwan tend to come from Malaysia, Indonesia, Singapore, India, the Middle East, and China.

“The rapid economic growth of Malaysia and Indonesia, the proximity of those countries to Taiwan and the number of direct flights, means those two markets are our main focus.”

The Tourism Bureau has worked with Muslim social-media influencers such as Malaysian star Mira Filzah. She visited Taiwan with three other fashion/makeup Internet celebrities in 2018, to shoot a video promoting the country.

Between January and October of last year, the bureau says, the number of Malaysian Muslim tourists visiting Taiwan grew year-on-year by 29 percent. Meanwhile, “the number of arrivals from major [Muslim] markets… is growing at an average of more than 5 percent per year.”

Even so, Muslim tourists account for only about 2 percent of the 10-million-plus annual arrivals Taiwan has seen in recent years. The trend is upward, yet slow. In 2018, 49,597 of the Indonesian nationals entering Taiwan came for the purpose of leisure. For the first eleven months of last year, the total was 49,739.

If the Global Muslim Index influences travel decisions, this year could turn out to be a good year for Muslim-friendly tourism businesses in Taiwan. The most recent index — announced in April last year and weighing transportation, communications, environment and services — ranked Taiwan, along with the UK and Japan, as the joint third-best destinations for Muslim travelers among countries outside the Organisation of Islamic Cooperation.

So far, being Muslim-friendly is no guarantee that business will flourish.

Flying Cow Ranch (飛牛牧場) in Miaoli is one of 13 leisure farms in Taiwan that have obtained halal certification for its in-house restaurant.

“Not many Muslim tourists come here, no more than 1 percent of the total, but the number is slowly growing. Some book accommodation. Some are day-trippers. The average amount they spend is similar to that of other types of tourist,” says a member of the ranch’s marketing department surnamed Fang (方).

Two of the three amba hotels in Taipei have received Muslim-friendly certification.

Chiang says approximately 5 percent of those staying at Songshan and Ximending branches are Muslim, and that there’s been “steady growth” in the number of Muslim guests.

“To serve our Muslim guests, we’ve invested in washlets, prayer mats and Korans for guestrooms; utensils and halal ingredients for restaurants; and, of course, employee training,” he says.

Chiang says that obtaining and annually renewing Muslim-friendly and halal certificates isn’t easy, and that “the hotels didn’t receive any government subsidy for these investments. However, the Tourism Bureau and Taipei City Government have helped promote Taipei and the hotels to Muslim markets.”

Some Muslim residents are trying to narrow the information and catering gaps. One grassroots effort is taiwanhalal.com, launched in early 2016 by four Indonesian students at National Chiao Tung University (NCTU).

“The project started when we took a cloud computing class together, but we got the idea from Muslim students who’d previously studied at NCTU,” says Himmatur Rijal, one of the founders.

In 2017, taiwanhalal.com received a NT$200,000 subsidy from the NCTU Seed Fund, and became part of NCTU’s Start Up Incubator for 2017-2018. The Web site has also won backing from the ministries of education and economic affairs.

Another of the founders, Faisal Fahmi — now a PhD student at NCTU — describes taiwanhalal.com as a financially self-sustaining business created and designed to address a social problem.

“In our case, the problem was the difficulties Muslims face finding what they need in Taiwan,” he says.

The number of Muslims helped by the Web site last year “increased about 50 percent” compared to 2018, says Rijal, who now works as a software programmer in Hsinchu.

“When Muslims travel, they’re most concerned about halal food and praying. Sometimes we arrange halal lunch boxes for our customers, and we try to find clean places where they can pray,” Rijal says.

Accommodation remains an issue, he adds: “Most of the certified Muslim-friendly hotels are expensive. Few of our customers can afford them.”

He thinks the Taiwan’s official approach to Muslim tourism is broadly positive.

“They’re trying to increase the number of Muslim-friendly places. Taiwan is a good destination and attractive to Muslims, yet there’s still a lack of halal restaurants in some areas Muslims would like to travel to. The government needs to make a greater effort to make traveling in Taiwan more convenient for Muslims, especially outside Taipei.”

Comments will be moderated. Keep comments relevant to the article. Remarks containing abusive and obscene language, personal attacks of any kind or promotion will be removed and the user banned. Final decision will be at the discretion of the Taipei Times.

Shut up and teach? Why labor unions like mine weigh in on the Israeli-Palestinian...

UNSC says it does not support the restoration of the Islamic...