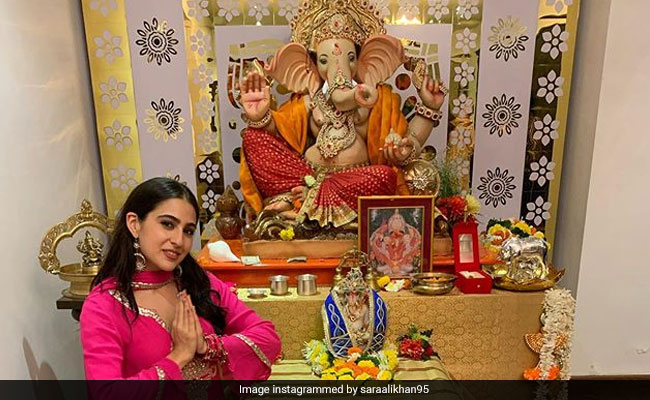 Just days after Shah Rukh Khan was bombarded with hateful comments for his Ganesh Chaturthi post, trolls have focused their attention on actress Sara Ali Khan for celebrating the festival. Sara is the daughter of actor Saif Ali Khan and his former wife Amrita Singh, and celebrates all festivals throughout the year with her family. On Thursday, she shared a few photos from her Ganesh Chaturthi celebrations when haters decided to pounce on Sara’s post with vile comments questioning her faith and asking whether she’s a Muslim or a Hindu – trolls particularly had a problem with Sara celebrating a Hindu festival. “Ganpati Bappa Morya,” Sara captioned her photos, which prompted a barrage of nasty remarks, rarely punctuated by comments from fans in the actress’ defence.

For those who missed the memo, Sara Ali Khan is a “proud Indian” above all.

Sara Ali Khan, who is known for basking in festival fervour on social media on every possible occasion, never misses sharing interesting posts be it on Holi, Diwali, Christmas or Eid. Her Holi post this year was accompanied by a poem and a throwback, also featuring her younger brother Ibrahim Ali Khan.

On Eid, fans received two wishes – from baby Sara and also from the grown up one. See her post:

Sara made her Bollywood debut in 2018 with Kedarnath, after which she starred in Simmba. Sara’s third Bollywood film Love Aaj Kal released on Valentine’s Day this year, also starring Kartik Aaryan, who she was rumoured to be dating. Sara is now looking forward to the release of Coolie No 1, in which she has been cast opposite Varun Dhawan.

UNESCO World Heritage Committee session to be hosted by China after a one-year hiatus...