Khan’s warning came as the country registered its lowest single-day rise in cases in almost three months, according to the latest government data released on Tuesday.

Khan addressed the nation from his office in the capital Islamabad on Monday, exhorting citizens to continue to follow social distancing protocols so that the economy could be further reopened.

“If we have to impose a lockdown again, it will affect our economy greatly … We will find it hard to find employment for our people,” he said.

Since July 2, the number of active coronavirus cases has dropped dramatically, driven mainly by a surge in recoveries and lower rates of new infections. Currently, the country has 26,834 active cases, according to official data.

The mortality rate stands at 2.16 percent, consistent with other countries in the region and far lower than many European or North American countries.

“Our intensive care beds, our oxygenated beds … the pressure has greatly reduced on them,” said Khan.

“The way we are seeing the trends going, it is Allah’s grace … that today Pakistan is among those few countries that has managed to control the spread of this virus.”

Khan warned, however, that public gatherings around Eid al-Adha – when Muslims sacrifice animals, distribute their meat to the poor, and gather with extended families and friends – and during Muharram, a month of mourning and mass religious gatherings for Shia Muslims, could lead to a spike in infections.

“The world now knows that as your cases drop, if you are not careful, then your cases can rise once again,” he said, giving the example of a “second wave” of cases in Spain, Australia and Iran.

“Today, I want all Pakistanis to listen to my words carefully: […] you must understand that these two events, of Muharram and Eid, if we are not careful, then our cases can rise again. That will damage us greatly.” 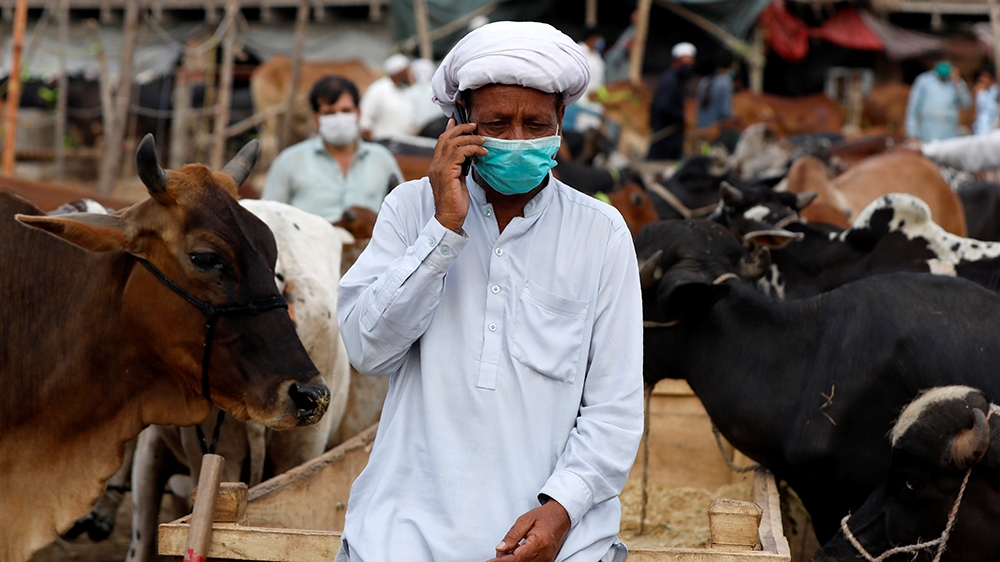 A man wears a mask while selling cows for Eid al-Adha at a cattle market in Peshawar, Pakistan [Fayaz Aziz/Reuters]

Also on Monday, the provincial government in Punjab, the country’s most populous province, imposed a surprise complete lockdown, closing all businesses and shops other than grocery stores and pharmacies until August 5.

Punjab province’s Health Minister Yasmin Rashid said the move was made to control possible spread of the virus during Eid al-Adha.

“The lockdown announced today is to prevent a spike in coronavirus cases post-Eid al-Adha,” she said. “To keep the curve flat, keeping in mind the lack of SOPs followed by the public, this step is unavoidable to protect all of us.”

Number of cases could be higher

Preliminary seroprevalence studies suggest that the rate of coronavirus infection in Pakistan is far higher than official figures suggest, but that most of those infected exhibit no symptoms and suffer few ill-effects.

According to one such study, conducted by multinational pharmaceutical firm Getz Pharma among office workers, healthcare workers and contacts of coronavirus patients in the southern city of Karachi, the number of cases in Pakistan could be far higher than officially reported.

The study, conducted using antibody tests, showed that among the 24,210 people tested, 17.5 percent held antibodies for the virus, indicating they were either currently carrying it or had recovered from it.

Extrapolating based on the specific demographics of the categories of those tested, the study suggests the number of total cases in the country could be as high as 4.2 million, 15.2 times the number recorded by the government.

Pakistan’s testing regime has come under criticism in recent days, the rate dropping rapidly from a June 19 hight of 31,681 tests to between 18,000 and 25,000 in the last month.

On Monday, Pakistan conducted 19,610 tests, registering a test-positive rate of 4.8 percent. Government officials point to the latter figure as a sign that the testing is at an adequate level.

Last week, Dr Zafar Mirza, head of Pakistan’s health ministry, cited a lower number of patients seeking treatment or tests at hospitals as the prime reason for the lower rates of testing.

On Monday, Khan said his government had plans to further reopen the country’s struggling economy, but that depended on how the period over Eid and the month of Muharram goes.

“If you are careful in Eid, and [in] Muharram … then we will get an opportunity to reopen restaurants and tourism,” he said. “And then … we need to reopen our universities, our schools and our colleges.”

The Recent Debate On SRK And Hockey Made Us Revisit ‘Chak De! India’

Islamic New Year 2021: From Date to Significance, Everything to Know About Hijri New...

SBSP chief Rajbhar says party will ally with BJP if its CM nominee is...

The Recent Debate On SRK And Hockey Made Us Revisit ‘Chak...