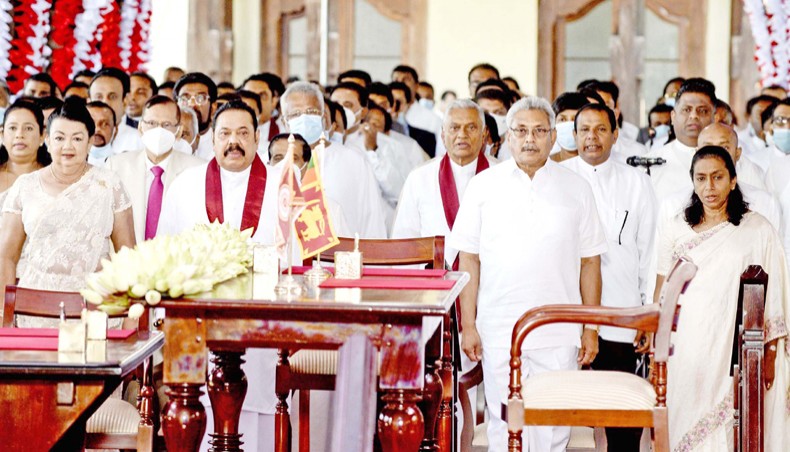 Sri Lanka’s president Gotabaya Rajapakse, second from right, and prime minister Mahinda Rajapakse, second from left, along with new cabinet ministers stand for the national anthem during the cabinet swearing-in ceremony at the Buddhist Temple of the Tooth in the ancient hill capital of Kandy on August 12.— Agence France-Presse/Lakruwan Wanniarachchi

MUCH is hoped for from the new government which triumphed with an unprecedented two-thirds majority. The fate of the country at this critical juncture depends on the government’s sagacity when the COVID-19 pandemic continues its rampage throughout the world and the world economy is in decline. There was an expectation of new faces in the cabinet equal to this task and equipped with the professional orientation that president Gotabaya Rajapaksa has brought to the fore. However, the exigencies of competitive politics, the need to reward loyalty and those who can bring in the votes appear to have prevailed over the demands of professional competence.

Most of the ministers selected are those from the past, including those accused of various offences and have cases in the courts against them. Particularly disappointing has been the failure to appoint women, with only one of the 27 cabinet ministers being a woman. The equal representation of women at all levels of society is a modern ideal. Those who seek international legitimacy, whatever other failings, would tend to improve the status of women. However, in a rather unfortunate turn of events, the subject minister of women’s affairs is a man, and one who is not known to be a specialist in the field of gender equity.

On the plus side, there are silver linings in the appointments of ministers. The main one has been the government’s discipline in keeping the number of cabinet ministers limited to 30 and under as mandated by the 19th amendment. This is an act of restraint, as less restrained governments have reached the 50 mark in terms of cabinet ministers in the past. Another encouraging action has been the appointment of Mohamed Ali Sabry as minister of justice despite criticism that he has been president Gotabaya Rajapaksa’s lawyer in a number of cases in the past few years and also on account of his community. By doing this the government has ensured that the cabinet will be multi-ethnic and multi-religious in its composition as befits a multi-ethnic and multi-religious polity.

There is a lacuna in today’s national politics with regard to national politicians who can reach out to the ethnic and religious minorities to make them feel included in the governance of the country and Sri Lankan in their identity. The recently held elections were notable for not having any of the major political parties proposing how they would bridge the ethnic and religious divides. The last of the champions of non-racist politics, former prime minister Ranil Wickremesinghe, is now battling for his political life partly on account of having been identified with being over-sympathetic to the demands of the Tamil and Muslim minorities. Previous champions, such as former president Chandrika Kumaratunga and former foreign minister Mangala Samaraweera are presently out of the political centre stage.

The disintegration of the UNP which Ranil Wickremesinghe leads created a vacuum at the recently held general election which resulted in more than two million voters either not voting or spoiling their votes. There is a possibility of the ruling party claiming a part of these votes. This would require new strategies of reaching out to the minorities. The promise of economic development on an equitable basis and regardless of ethnicity or religion can be a powerful motivating factor at elections. Indeed, the recent elections saw a significant shift in the pattern of ethnic and religious minority votes in relation to the presidential election held nine months earlier. In both the north and east and in the central hills which have large populations of minority voters, the ruling party was able to make inroads both directly and through its political allies.

THE government’s relative success in wooing the minorities at this election is noteworthy as it has rejected the reconciliation process initiated by its predecessor as unsuitable to the country’s ethos and damaging to national sovereignty. However, the need for national reconciliation continues to remain. Despite the gains achieved electorally by the ruling party and its allies, the electoral map that emerged after the elections continues to show signs of this division. The big majority of seats in the northern and eastern provinces went to Tamil and Muslim parties in contrast to the voting pattern in the rest of the country. However, the victory of government allies who promised economic development in parts of the north and east suggests that the ethnic and religious minorities are no different from those in the majority community in seeking to improve their economic situation.

The government has indicated that its approach to national reconciliation will lie through economic development which requires both political stability and assurance that those who invest will be protected by the law. Apart from the reconciliation mechanisms set up by the previous government, the ministry of justice will be responsible for overlooking the attorney general’s department and other institutions which play key roles in ensuring the rule of law. Ensuring a balance between the imperatives of justice, rule of law and national reconciliation are the prerequisites for economic development if Sri Lanka is to live up to its potential in a way that it never did in the past.

Jehan Perera is executive director of the National Peace Council of Sri Lanka.

Will Shabnam Ali be the first Muslim woman to be hanged in India?

Pakeha switch to the secular not so for other NZ cultures