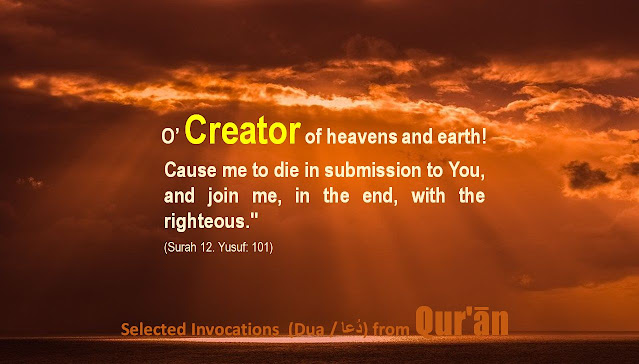 For more Selected Verses, please refer to our reference
page: Selected
Invocations / Dua ” Ø¯ÙØ¹Ø§ ” from the Qur’an. You may
also refer to our Reference
Pages for knowing more about Islam and Qur’Än.

Reading the Qur’Än should be a daily obligation of a Muslim –
Reading it with translation will make it meaningful. But reading
its Exegesis / Tafsir will make you understand it fully.

An effort has been made to gather explanation / exegesis of
the surahs / verses (ayat) of the Qur’Än from authentic sources
and then present a least possible condensed explanation of the
surah. In that:
In order to augment and add more explanation as already
provided by [2], additional input has been interjected from
following sources:
In addition
the references of  other sources which have been explored have also
been given above. Those desirous of detailed explanations and
tafsir (exegesis), may refer to these sites.

If you like Islam: My Ultimate Decision, and to keep yourself
updated on all our latest posts to know more about Islam, follow us
on
Facebook

Please share this page to your friends and family members
through Facebook, WhatsApp or any means on Social Media so that
they can also be benefited by it and better understand Islam and
the Qur’Än – Insha Allah (Allah Willing) you shall be blessed with
the best of both worlds.

A look at Biden’s first executive orders in office

UP govt seeks direction to transfer all Anti-Conversion Ordinance pleas to...