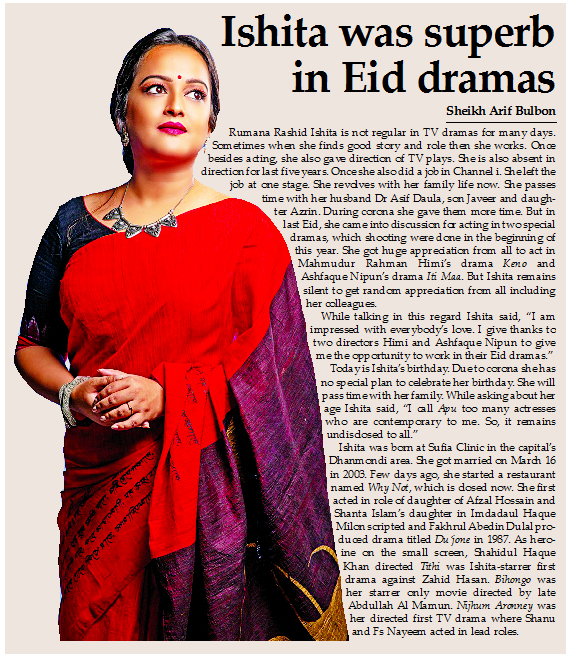 Sheikh Arif Bulbon :
Rumana Rashid Ishita is not regular in TV dramas for many days. Sometimes when she finds good story and role then she works. Once besides acting, she also gave direction of TV plays. She is also absent in direction for last five years. Once she also did a job in Channel i. She left the job at one stage. She revolves with her family life now. She passes time with her husband Dr Asif Daula, son Javeer and daughter Azrin. During corona she gave them more time. But in last Eid, she came into discussion for acting in two special dramas, which shooting were done in the beginning of this year. She got huge appreciation from all to act in Mahmudur Rahman Himiâ€™s drama Keno and Ashfaque Nipunâ€™s drama Iti Maa. But Ishita remains silent to get random appreciation from all including her colleagues.
While talking in this regard Ishita said, â€œI am impressed with everybodyâ€™s love. I give thanks to two directors Himi and Ashfaque Nipun to give me the opportunity to work in their Eid dramas.â€
Today is Ishitaâ€™s birthday. Due to corona she has no special plan to celebrate her birthday. She will pass time with her family. While asking about her age Ishita said, â€œI call Apu too many actresses who are contemporary to me. So, it remains undisclosed to all.â€
Ishita was born at Sufia Clinic in the capitalâ€™s Dhanmondi area. She got married on March 16 in 2003. Few days ago, she started a restaurant named Why Not, which is closed now. She first acted in role of daughter of Afzal Hossain and Shanta Islamâ€™s daughter in Imdadaul Haque Milon scripted and Fakhrul Abedin Dulal produced drama titled Duâ€™jone in 1987. As heroine on the small screen, Shahidul Haque Khan directed Tithi was Ishita-starrer first drama against Zahid Hasan. Bihongo was her starrer only movie directed by late Abdullah Al Mamun. Nijhum Aronney was her directed first TV drama where Shanu and Fs Nayeem acted in lead roles.

Not related to CAA: Union govt on order inviting non-Muslim refugees for citizenship