Advertise here
Home Religion IRGC Commander Salami: The IRGC Is ‘The Brand Of The Islamic Revolution’;...

Recently, Hossein Salami, commander of Iran’s Islamic Revolutionary Guard Corps (IRGC), gave two speeches to commanders of the IRGC and its Qods Force, which is responsible for operations outside Iran. In the speeches, he explained the essence of the IRGC and of the Qods Force. In both, Salami, who is known for his flowery rhetoric, fulsomely praised the uniqueness of the IRGC, in an attempt to fill his men’s hearts with pride.

At an August 11, 2020 meeting of the joint administrative command council,[1] which was attended by the IRGC deputy commander and coordinating deputy of the steering team of the headquarters of the representation of Iranian Supreme Leader Ali Khamenei in the IRGC,[2] delivered a speech focusing on the IRGC’s importance in Iran’s Islamic revolutionary regime. In it, he described and set out the characteristics of the organization and its members.

Two days later, on August 13, Salami gave a speech to Qods Force commanders on the occasion of the anniversary of “Hizbullah’s victory over the false Zionist regime” in the 2006 Lebanon war. In this speech, he spoke about the martyrs of the resistance front, headed by the late Qods Force commander Qassem Soleimani who was killed in January 2020 by the U.S., and the importance of the jihad they waged in the name of  Iran’s Islamic Revolution. Salami described the arena of the conflict between Iran – as the leader of the resistance front and the Islamic Revolution – and the U.S. and its supporters in terms of a perpetual battle with the enemies of Islam. He also stated that in this never-ending conflict, Iran and the Islamic Revolution have the upper hand, and promised vengeance for the killing of Soleimani

The following are the main points of his statements at both events.

“The IRGC Is A Tree Originating In The Extensive [Battle]Field Of Jihad” – August 11, 2020

In his August 11 speech to IRGC commanders, Salami said: “In the IRGC, there is ongoing jihad. The IRGC is the only institution that never abandoned jihad since its establishment. The IRGC envelops its body with the garment of this jihad, and as shown by the events and happenings in the world, especially in the Islamic Revolution’s clash with the arrogance [i.e. the West, led by the U.S.], this jihad is infinite and never-ending.

“The IRGC is a tree originating in the extensive [battle]field of jihad. But the important point is that the shape of this jihad is constantly changing, and as time passes the role of the IRGC members in the continuation of this matter expands as the role of weapons lessens. What differentiates the IRGC from other, conventional armed forces in this world is not the tools – that is, our tools are never a standard for our advantage over the others. 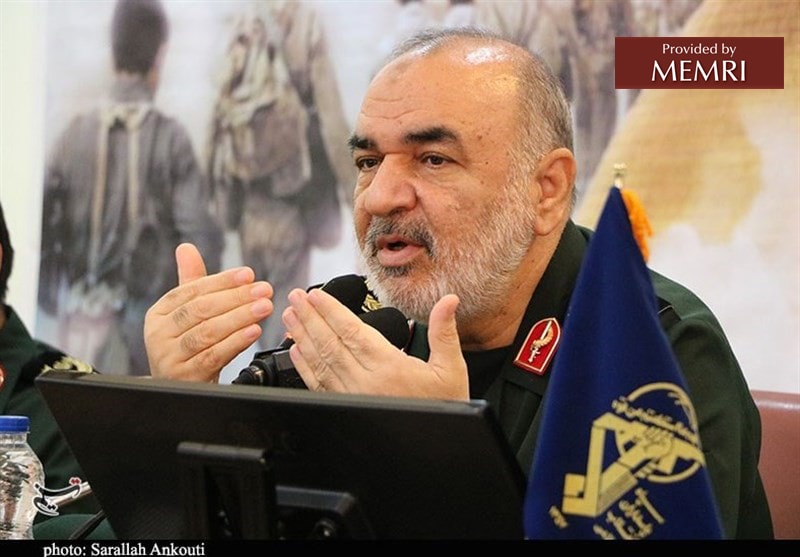 “[The uniqueness of the IRGC lies in the following:] At its center, the IRGC’s heart is thoughtful. That is, it has rationality, contemplation, and thought, and its nature is revolutionary and doctrinal. The IRGC’s language is the language of Islam and the revolution. It is the IRGC that expands the strategic thought of the Leader, who stands at the foothills of that summit and directs a boiling spring of wisdom onto and into the body of the society. The IRGC has ears with which to hear; its ears do not listen [just] to facts, and in this way it has a powerful intellect, profound insight, and a listening ear, and these are the characteristics of a living organism that seeks the truth – and that is why we can refer to the IRGC as the embodiment of truth. The IRGC is a standard, a standard for its uniqueness. That is, we believe that the IRGC is an institution for revolutionary reference that not only preserves the revolution but also inspires, and is a model for imitation.

“The arena of representation [i.e. representing Khamenei in the IRGC] is how the IRGC expresses [its values]. That is, the [IRGC’s] political branch works with the political leaders for the sake of the political navigation of the IRGC and of society; it is the words of the IRGC that are disseminated and published. The arena of representation in the IRGC itself shares the same characteristics as the IRGC, and is the body of reference. This is a system of coordinates for reference, according to which others measure how revolutionary their position is, and how supportive it is of the Jurisprudent,[3] and how believing it is, and how scholarly it is.  In the IRGC, there is no hierarchy of faith, insight, and vision. That is, there is no rule stating that the commander of the IRGC is at a higher level of belief, understanding, or insight than another commander or soldier of a lower rank than the IRGC commander or than a soldier in a higher organizational role.

“All IRGC members must have insight, and must be equal parts believers and pious. We do not have a rule stating that people at low administrative levels are less believing. Therefore, it is difficult. That is, the one in charge of the office of the representative of the leader of a district must be just as virtuous, insightful, profound, significant, and knowledgeable as the representative of the [Supreme] Leader in the IRGC, so that he will be able to convey this knowledge to IRGC members. That is, the dissemination of knowledge, spirituality, insight, and so on is a great deal of work.

“[Khamenei’s] representative [in the IRGC] is in charge of disseminating and promoting religious doctrine in the IRGC, and because the IRGC must be a mirror of the doctrine of Islam, this activity is very important. The IRGC is a model institution, a standard on the level of the symbol of the revolution, and a complete mirror of the virtues of the revolution. In modern terms, this is the brand of the Islamic revolution. Therefore, these virtues and values must be waved [like a banner] everywhere we look.”[4]

“The Spirit Of Jihad Still Prevails Today In All Scenes Of Conflict With The Enemies” – August 13, 2020

In his August 13 speech to Qods Force commanders, that focused on the late Qods Force commander Qassem Soleimani, Salami said: “This proud commander breathed new life into the revolutionary essence of the body of the Islamic lands, and brought eternal glory to the Islamic Revolution, to the [revolutionary] regime [of Iran], to the Iranian nation, and to the IRGC. The spirit of jihad still prevails today in all the scenes of the conflict with the enemies. The mujahideen [the fighters of Iran’s Islamic resistance] remain [standing] in the arena; the enemies oppressed and hopeless, as they observe the scenes of transformation taking place from day to day in favor of the Islamic nation.”

Describing “the art of the IRGC Qods Force as a formula for ‘small victories over many enemies,’ and the embodiment of the glorious verses of the Quran,” Salami said: “The defeat of the coalition of the greatest materialist powers in the history of mankind, who were interwoven and united in their vanity, was a great step and the actualization of a divine promise. It was attained in the best possible way by the mujahideen [fighters] who go in the path of God.”

Referring to the “territory of the Islamic revolution as a perpetual battlefield of conflict with the enemies of Islam,” he said that “the common denominator in all these conflicts was that the Islamic revolution is administered by Iran, while the global arrogance is administered by America.” He continued: “The passage of time has shown that the Islamic revolution, with its leaders’ intelligence, caution, and tact… has remained uppermost in these scenes. In contrast, according to the American theoreticians, the main reason for America’s failure is the lack of wisdom and intellect in its governmental system.

“Our opportunities for growth and strengthening were obtained from the jihad area: We extracted the rules of war from the battlefields, and the Qods Force derived and demonstrated the rules of overcoming many enemies in the real battlefield. The greatest role of the Qods Force, in addition to achieving concrete victories over the merciless and armed enemies, and liberating the Islamic lands from the occupiers, was to breathe life into the concept of jihad and to convey its message to the nations and to the youth of the Islamic world. 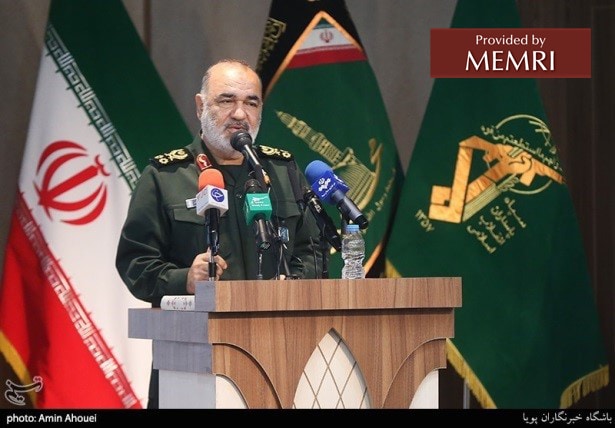 “The first opportunity to rule is thinking about how to build power. Without power, it is impossible to fight and stop the enemy in various areas. The art of the Qods Force is ‘the birth of strength,’ and it will remain forever in God’s grace. The enemies came to rearrange the elements of strength in the Islamic world, to build a state, and to take everything from it. But the result of their desperate efforts is nothing but a tired economy, an ineffective military force, hopelessness, and the loss of respect for the superpower and the loss of its political structure…

“Our enemies should know that there is no safe haven. With the death of Hajj Qassem [Soleimani], they created for themselves a permanent source of danger and vengeance. This vengeance will come, sooner or later, and it will absolutely be severe.”[5]

[1] The joint administrative council comprises the command echelons of the IRGC and Iranian Supreme Leader Ali Khamenei’s representation in the IRGC.

[2] In the original, Salami referred to the vali-e faqih – the Jurisprudent who rules Iran, that is, Supreme Leader Ali Khamenei, who appoints representatives in each and every institution and organization in Iran.

Israel braces for unrest ahead of right-wing Jerusalem march