Mariam Khaled squinted her eyes, drew in her sail against the wind and set her white dinghy toward a point on the riverbank: Adhamiya, to be precise, in central Baghdad.

With the orange sunset saturating the sky, a cluster of mostly teenage sailors, windsurfers and jet-skiers were making waves along the Tigris River.

“It’s a difficult sport that requires a lot of effort, and plenty of patience and perseverance,” 16-year-old Khaled, a former junior swimming champion, said, pulling her dinghy up the muddy bank. “But I want to show everyone that we, Iraqi women, can succeed.” 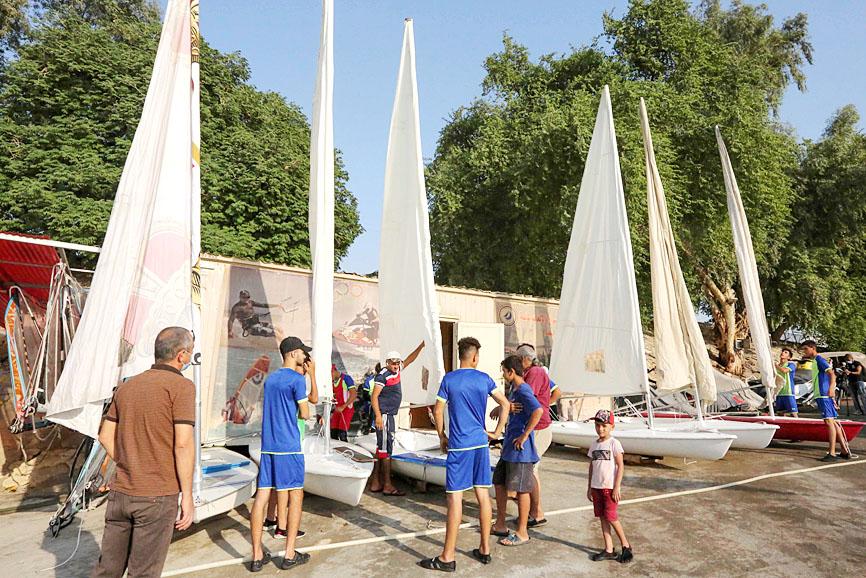 Water sports are revolutionizing how Iraqis interact with the historic Tigris and Euphrates rivers, which gave the country its name — the “land between the two rivers” — millennia ago.

Water levels in the twin rivers have dropped by half because of dams upstream in Turkey and Iran.

One year in Baghdad, the levels were so low that residents could pass from one bank of the Tigris to the other on foot.

Following the US-led invasion that toppled then-Iraqi president Saddam Hussein in 2003, Adhamiya became the heart of a Sunni insurrection and one of the most dangerous places in Baghdad.

The dark years of the country’s sectarian fighting from 2006 until 2008 pitted it against the Shiite district of Kadhimiya, just across the Tigris.

The remains of victims back then who were thrown into the river still sometimes wash ashore — but today, Baghdad’s river bends see much more life than death.

Along the waterfront, restaurants and small funfairs are teeming with families who gaze out at the young athletes.

“It’s now a place of leisure and relaxation,” sports journalist Ghazi al-Shayaa said. “It’s a joy to see Baghdadis gathering here nearly every day to watch the swimmers or the boats go by.”

The latest major round of violence in Iraq ended in 2017, when the government declared victory in its years-long fight against the Islamic State group.

The following year, Ahmad Mazlum came up with a crazy idea: Iraq’s first water sports federation should be set up.

The federation’s riverside headquarters in Adhamiya is identifiable by the rows of white dinghies and bright windsurfing sails.

“An [imported] sailboat can cost US$10,000, so we had to build our own in a workshop we set up with the club members,” federation deputy head Mazlum said.

Boys and girls train together under Anmar Salman, a regional rowing champion who recruited from fellow rowers and Iraqi swimmers to launch the sailing club.

Aboard a motorized boat one late afternoon, he advised the young sailors on how to tack and deal with wind conditions.

The stretch of river where they practice has surprisingly robust winds of up to 15 knots, likely because the buildings on either side create a tunnel.

Salman is planning to take his young trainees to qualifiers next year in Abu Dhabi, United Arab Emirates, for the Tokyo Olympics.

However, as they can only train up and down the river, they might not have the versatility of sea sailors.

The team also lacks funding, Salman said, but the spirit of camaraderie and discovery seems to be enough for the youth in Adhamiya.

“Luckily, our athletes adore the sport and train for the joy of doing it, without demanding much else,” Salman said.

Comments will be moderated. Keep comments relevant to the article. Remarks containing abusive and obscene language, personal attacks of any kind or promotion will be removed and the user banned. Final decision will be at the discretion of the Taipei Times.

World must speak out against religious violence – New Straits Times