SRINAGAR: Jammu and Kashmir National Conference party president and Member of Parliament from Srinagar Dr Farooq Abdullah met with another group of party leaders on the second consecutive day as per the programme here at his Gupkar residence in Srinagar. 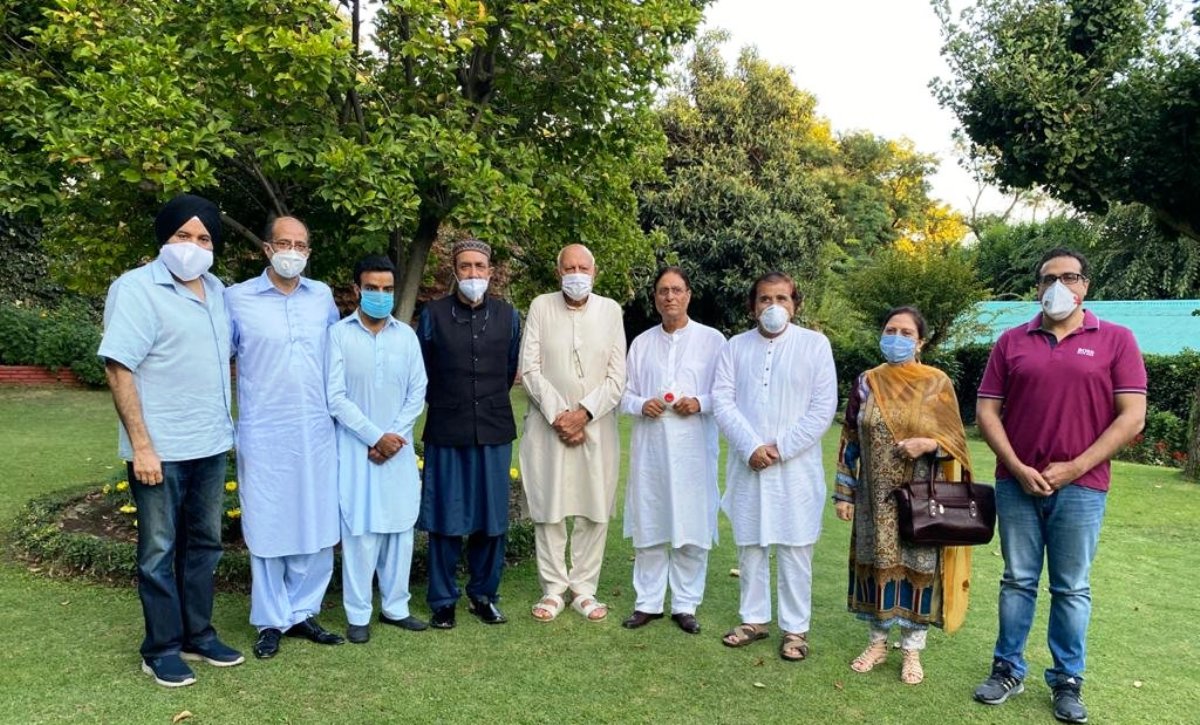 National Conference President and Member of Parliament from Srinagar Dr Farooq Abdullah met with another group of party leaders on the second consecutive day on Friday, August 21, 2020.

He said that the party president had already undertaken to meet the leaders in the batches of after taking cognizance of the stand taken by the government in the high court in the Habeas corpus mattes filled by the president and the vice president of the party for securing the liberty of various leaders of the party that have been under illegal detention since august last year. Being mindful of the prevailing circumstances, the party president had chosen to call all the incarcerated leaders in batches of four to meet him at his residence.

As part of the programme, eight other party leaders including Dr Bashir Veeri, Irfan Shah, Aga Mehmood, Mohammad Khalil Bandh, Saifudin Shutru, Abdul Majid Larmi, GN Adgami, Hilal lone who have been under incarceration since August last year have been called by party president at his residence tomorrow.

The spokesman said that interacting with a small number of devotees who had thronged the shrine, the Party President asked people to seek Almighty’s atonement for salvaging the entire humankind from prevailing COVID-19 induced crises.

“The holy book Quran guides us to be cognizant and conscious of God, of truth, of the piety and fear of good.  Revered Reshi’s not just followed the principles laid down by the holy Quran and Hadith but also taught the same to scores of others. Reshis spearheaded a mass social movement in Kashmir following the teachings of our patron saint Sheikh Noor Ud Din Noorani (RA). These great men besides achieving higher stations in the realm of spirituality also educated common masses in their native Kashmiri language about the various facets of religion and spirituality,” he said.

On the occasion, the Party president prayed for return of healthier times and wellbeing of people. He also prayed for peace, prosperity and brotherhood in Jammu and Kashmir, said the spokesman.

Israelis and Palestinians brace for unrest over ultranationalist march | Israel

How the 2001 northern riots boosted the far right – and reshaped British politics...

Waseem Rizvi prints ‘The Real Quran’; omits 26 verses from it

Uzma Mir: If TV and film continue to portray Muslims as the enemy within,...

Israelis and Palestinians brace for unrest over ultranationalist march | Israel

Waseem Rizvi prints ‘The Real Quran’; omits 26 verses from it