My tribute to Aligarh Muslim University

It’s October 16 today, and tomorrow will be October 17. Why am I starting the article by focusing so much on dates? Well, because tomorrow is a big day for the family of Aligarh Muslim University (AMU) and as I sit down to write this, my heart is struggling to stay afloat in an ocean filled with despair.

Today, at this time, the hostel would have be abuzz with girls running here and there, and I would have been sitting, watching my roommate Sadia’s surprise dresses. But I can’t do that right now, and for sure, I don’t know how to swim. So, what can I do right now to save my heart from drowning? I can give a tribute to the place that has made me, and given me a voice, and that has given me a home away from home.

It was 2018 when I first entered Aligarh Muslim University. It was my first time in Aligarh also. Unaware of what AMU was, I stepped into a place I had only heard bad things about. I had heard about how they repress girls and cage them. But these were just words and I was destined to find out how true or untrue they were. My first friend in college was a Kashmiri who made sure I was comfortable, from shifting me to my hostel room to making sure that I attend all classes on time. Sharing a room with a stranger, and on top of that, a senior, was always something that got me anxious.

But the seniors I met and got as roommates made sure that I was more than comfortable. From making my bed to getting me breakfast, from a failed attempt at calling the spirits to holding me through my panic attacks, they have been my family. My personal favorite is Zareen appi or, as I fondly call her, Zuzu. Her eyes would sparkle as she’d tell me about her stories at 2am on the stage. She would guide me on small small things, and sometimes speak up for me. Her smile made sure that I felt at home with her.

From the teachers to the working staff, no one felt like an outsider. We would spend hours talking to the old man in the dinning, and smile when the old lady would pat our heads fondly. Everyone was ready to help everyone else, people who didn’t know me made sure that I was facing no problems. This place had taught me generosity, it has taught me how to respect, be it a sweeper or the principal. Everyone deserves respect. This place has taught me tehzeeb (etiquettes).

It was my first year at the university, and just like every other year, the Central government had decided to attack the University again, something which I realised later. Anyway, one of our seniors was charged with sedition. I’ll not get into the story, but soon, protests began. It was the first protest of my life that I had been a part of (there were many more to come later 😊).

A group of girls entered Bab-e-Syed, the iconic protest site in Aligarh. A group of boys had come to walk with us to Bab-e-Syed, the importance of which I came to know only later. We passed the CRPF personnels and police officers who stood with lathis in their hands. I clutched my friend’s hand as my heart shuddered under their inappropriate gaze. Once we were seated, the boys formed a chain around to protect us from any action of police. 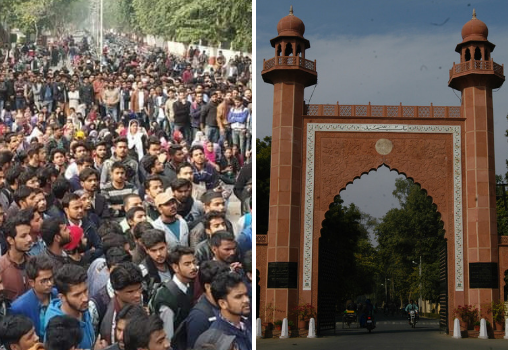 In between, there was some scuffle between the police officers, and the boys struggled, but did not let go of the chain, an image which is still intact in my head. Amid the chaos, there was always a voice in the mic that kept reminding the boys to ensure that nothing happens to the women, and that voice made me feel safe. I heard that voice again over the protests to come a year later, when we were just five girls among a sea of boys at 8pm. I was not among my family, none of them my brothers, but I felt safe for the first time as a girl.

By the next protest, I had found my group. The group of three girls who talked of nothing but revolution, who liked people like Sharjeel Imam, Umar Khalid and Kanhaiya Kumar. I was always someone with less friends, and finding these three was something I’ll always be thankful to the university for. We went to the protests together and it was the time when this university made me, me. It gave me a voice.

Aligarh Muslim University has given me a new home, a new life. It has made me soft and strong at the same time. This place isn’t just a university, this place isn’t just a place from where I’d get a degree, this place is emotions, home, hope and life to many of us. I don’t know if I’d have a good career, but I know I’ll be proud to have been from the university whose students always stood strong in the face of oppressors and spoke for justice. I’ll always be proud that I’m a human and I’ll be proud of being a member of the AMU family.

Tomorrow, Izzah would have struggled putting an eyeliner on me, Samia would have been shouting at us for getting her late, Shireen would have complained of the long line in the vegetarian section, and Asiya would have managed to smuggle in six shahi tukda for our sweet dish on normal days.

I’d close this by saying,

Pakistan Assembly Wants Envoy in France Recalled, But Islamabad Yet to Appoint Ambassador