The gates of Lahore’s Sacred Heart Cathedral were symbolically opened by Archbishop Sebastian Shaw to mark the reopening of Pakistan’s churches for public Masses. 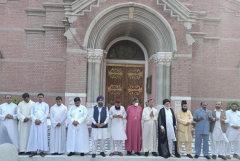 LAHORE: The gates of Lahore’s Sacred Heart Cathedral were symbolically opened by Archbishop Sebastian Shaw to mark the reopening of Pakistan’s churches for public Masses.

Also present on Aug. 16 were Bishop Irfan Jamil of the Anglican Church, Church of Pakistan representatives, Muslim leaders and officials of the National Peace Committee for Interfaith Harmony.

The move came days after Pakistan’s government ordered the lifting of most of the months-long coronavirus restrictions in the country.

Although 6,168 people had died of Covid-19 in Pakistan as of Aug. 16, the number of new cases has seen a dramatic decline. Only six deaths were recorded in the South Asian country on Aug. 16, according to the National Command and Operation Centre.

Pastor Shahid Meraj, dean of the Anglican Church of Pakistan in Lahore, recited an opening prayer and thanked God for saving humanity and Pakistanis from the pandemic.

Archbishop Shaw said the faithful had followed the government’s guidelines and requested all Christians to save humanity and faith by practicing social distancing.

“We are all brothers who belong to different religions. We are followers of peace and visit the worship places of each other. We are indeed united even in the difficult time of Covid-19,” he said.

“People of all religions are glad to go back to their worship places and those who left the world because of the pandemic may rest in peace,” said Singh, who prayed for unity and love among followers of various religions.

Asim Maqbool, a Muslim religious leader, said the virus had affected human beings without religious and ethnic discrimination. “We all had to put our trust in God and seek his forgiveness for our sins.”

Bishop Jamil said God has united everyone to stand together for poor people. “We were told to wash our hands as per the government’s guidelines but I say that we should wash our hearts and thank God for his protection.”

Qasim Raza Naqwi, a leader of the Shia community, congratulated everyone who had contributed to saving others.

Mufti Syed Ashiq Hussain said it is written in the Quran to respect all religions and their places of worship.––ucanews.com

This steering wheel controller is the real-deal – Yahoo Entertainment

Wills, Trusts And Investments From An Islamic Finance Perspective

The Latest: Israeli airstrike on Gaza house kills at least 7

No harm to Bushehr historical sites by quake

The Latest: Israeli airstrike on Gaza house kills at least 7